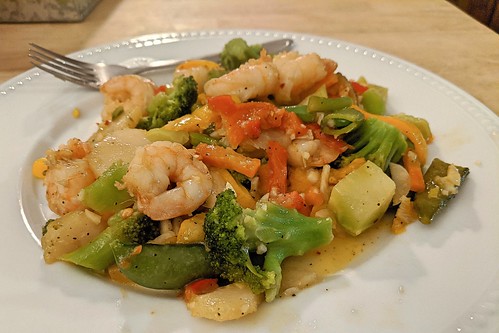 I have so many of these Made It Monday posts to catch up on! And some of them are SO good. And you know I will share (eventually) because I believe in sharing good food with the people I (probably) like.

This was a recent dinner and shouldn’t be posted for weeks if I’m working chronologically. However, I’m really excited to eat these left overs for lunch tomorrow so I’m going to share this one now. It’s sweet and spicy, buttery and gingery with some umami.

Besides, I do what I want.

I’m really trying to be more mindful of the meat I eat. I’m getting more plant based protein, but it’s still tough to get enough without being able to rely on wheat based items. I do like fish and shellfish, so I decided to get some of that in the rotation.

Can I tell you how much I love shrimp. It was a long decade when they thought I was allergic to shellfish. (When they actually tested me for it after 10 years of keeping away from it, I wasn’t allergic to it. Was I ever? Who knows.)

I went onto Pinterest for inspiration and found this recipe. Oh dear that looks good.

Darn it, I was out of some of the ingredients, tired, and didn’t feel like braving the storm that is the grocery store after work. Besides, I couldn’t get behind using a few others on shrimp (cinnamon? nutmeg?) so I did what I do and used it as a suggestion.

The original recipe was for 1/2 a KG (about a pound) but it was just me eating it so I only defrosted about half a pound. I cheat when I buy shrimp and by the frozen ones that are already been de-veined and peeled.

These things happen. Also, they were on sale.

Thaw shrimp. Mince your garlic and put in a small glass bowl. Add the ginger, chili flakes, pepper, honey, soy sauce, and olive oil. Mix until well combined. Put shrimp in bowl and cover it with the marinade mix. Let sit for 40-60 minutes. (You could probably use this much marinade for a full pound of shrimp.)

Right after you put the lime juice in the marinade, put butter in large frying/saute pan.

Let it melt on medium, then add bag of stir fry veggies. You don’t even have to defrost them. Move them around the pan a bunch so nothing is over cooked. When they start to soften, move all of the veggies to make an outside ring.

Now. Place the shrimp and the garlic etc in the middle of the pan. I used a fork to get the pieces out of the marinade, but not too much of the liquid. When the shrimp are turning mostly pink, mix everything back together. Finish cooking. Serve over rice if you want, but I don’t bother making it just for me.

I couldn’t believe how wonderful this was. It was sweet and spicy. It was garlicky and citrusy. I hadn’t even finished my first few bites when I had already decided I was making it again.

Now, Nik won’t eat this in the shrimp version, but I’ll try it as a chicken dish and see what he says.

Do you believe recipes are gospel and need to be followed to the letter? Or are you more of a “recipes are inspiration” kind of person?

One thought on “Made it Monday: Spicy Honey Lime Shrimp”