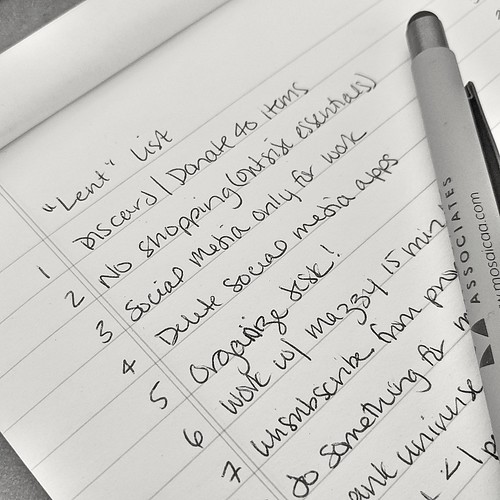 Even though we went to church almost every week as kids (and if we were home during college), Lent wasn’t something we did.

I think the first time I participated in it was post college with a guy I was casually dating. By the end of Lent, I had given him up, but I finished out the 40 days.

While Lent (for my non-Christian readers who haven’t asked or googled it) is a reflection of what Jesus gave up for his followers sins. (Incoming blasphemous statement! I don’t believe he did that per se, but that’s a topic for another day.)

My complicated relationship with religion aside, I see validity in some practices. Lent is one of them.

“Ash Wednesday, and the whole season of Lent, invites us to turn away from what doesn’t matter and turn toward what does matter.”

(From here– you might read it, there’s a lot of stuff to think about in it.)

By the way, it isn’t lost on me that the 40 days takes us through the start of Spring, when nature starts over, too.

So I’m participating in Lent this year. A secular version, but participating none the less. It won’t be like the year I gave up meat or another when I gave up peanut butter. (GAH!)

While there is some “giving up” on my list, it’s more of a giving up distractions than actual or actions. Some of it will be to “cleanse” my home (mental/physical/actual) and reset. Some will be to refocus. Some will be for my heart.

I’ve already taken my social media apps off my phone, tablet, and off my homescreen on my computer itself. It’s weird not checking in, but I want to see just how much I miss some of the “give-ups” at the end of the time.  Much like the guy I was seeing all those years ago, but unlike the peanut butter, I suspect I won’t miss them all that much.

Are you participating in Lent?