I love wine. Almost as much as I love coffee.

I also haven’t had a glass of wine in 12 days (at the time of writing this). Before that, it was probably a week or two.

No, that doesn’t seem like much, but for someone who would have a glass or two of wine every evening, grab a gf beer from the fridge, or splash some vodka in my seltzer on a regular basis, it feels like a long time.

I didn’t feel like I was overdoing it. Really, it felt like a friend holding my hand while I processed my day, settled into the evening, and blowing off some steam sometimes.

It wasn’t a conscious decision at first, I just didn’t feel like drinking. I mean sure, the holiday season had a lot of tasty boozy beverages, but Mazzy had me up so damn early every day I didn’t really feel like having  more than a glass of wine or a beer at the end of the day. I was far too tired to enjoy it. Sometimes even too tired to finish it.

Regardless of if I want to drink it, I shouldn’t waste it.

About a week into the new year, I realized I didn’t even feel like that anymore. I was drinking seltzer with some lemonade or just water over lots of ice. I’d have half a glass of wine here and there filled with ice.  (I like it as close to a slushy as possible.)

Then Nik and I had a date night at home with delicious dinner, dessert, and movies. I had a few too many glasses of wine.

Holy crap I felt like garbage. Worse than I had felt in years.

It was a lovely, happy, loving, and filled with laughter. It turned less lovely when I woke up in a start, sweating, and shaking because my sugar was bottoming out around 3 am. That’s generally not a good time.

Other than a desire here and there for brief moments, I haven’t wanted wine, beer, or a cocktail. (Although the other day – after having a DAY – it was hella tempting to put a splash of vodka in my cranberry/seltzer mix. I didn’t have any that would go well.)

Will this change tonight? Maybe? Tomorrow night? Who knows. I might consciously do a month and see how I feel after that. I haven’t decided.

So what was I drinking above? 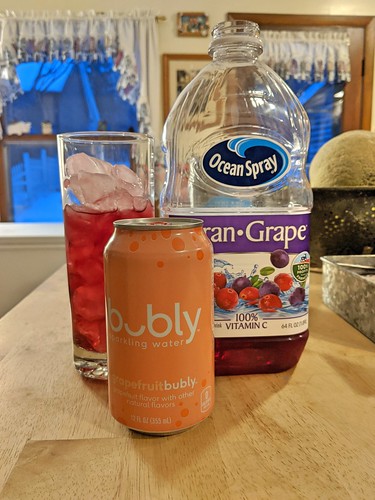 Glass filled with ice, about half a cup of cran-grape juice, which was topped off with grapefruit bubly. (I didn’t get paid to mention any of these, it’s just what I had on hand.)

It was too sweet at first, so I sucked out a bunch of the juice and put more seltzer in. That was much better.

I’ve lost a few pounds, my skin looks better, and it’s certainly been easier to get up in the morning with Mazzy than it was before.

It could very well be I’m just adjusting to the new schedule, but it could also be that my body isn’t spending energy processing alcohol and extra sugar so it can really rest. (Don’t get me wrong, I’m still tired, it’s just easier to get out of bed.)

I think I’ll keep this up and see where it goes. I don’t have to not drink, but right now it’s what I’m choosing.

I’m going to keep sharing the more interesting mocktails I make. You can add wine or whatever of your choice to them (no judgement here) or not. Your call. Besides, some of them are really pretty so if nothing else, it’ll add a splash of color to your glass-er day.